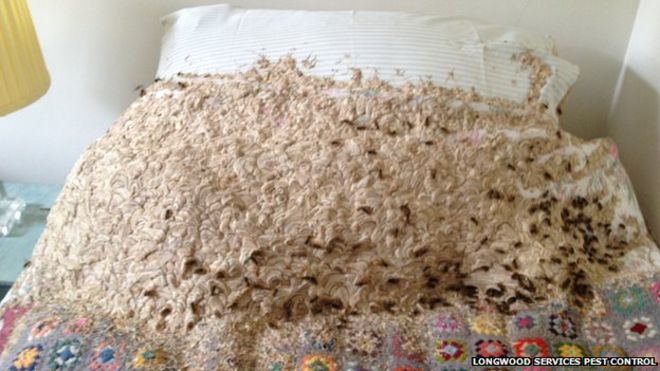 Image caption: The wasps had chewed through the pillows and the mattress of the bed in order to make their nest larger

A pest controller said he took on “the biggest job of his career” when he was called to deal with a nest of more than 5,000 wasps.

John Birkett, of Longwood Services Pest Control, said removing the 3ft (91cm) nest from a bed in Winchester was his most unusual job in 45 years.

He said it would have been “extremely dangerous” if the homeowner had tried to remove it herself.

“I just stood back in amazement,” Mr Birkett said.

The nest was discovered by a woman at her house in St Cross, in an unused spare room, where a small window had been left open.

Mr Birkett believes it may have taken about three months to build.

He said: “I did think what a wonderful job they had done.”

The wasps had chewed through the pillows and the mattress of the bed in order to make their nest larger.

However, Mr Birkett did manage to save the owner’s crocheted blanket.

He said: “The nest split in two and I have never seen so many wasps and I have been doing this for 45 years.

“I had to go in to the room and close the door, otherwise the house would have been filled.”

It took him about two hours to spray the insects and dismantle the nest.